A BEER WITH: THE ‘CHIEF SPRUIT FAIRY’ 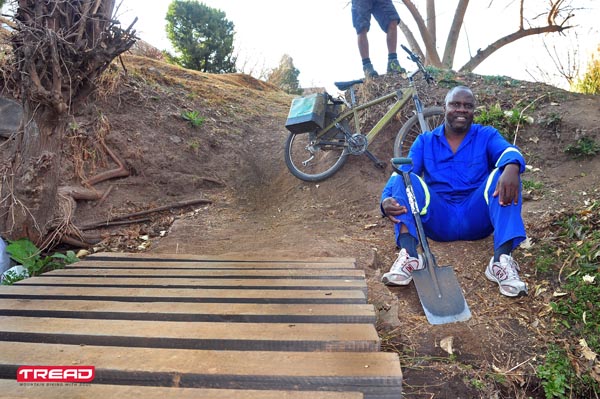 It’s probably the most popular mountain bike trail in South Africa, but it’s not purely a mountain bike trail. The Braamfontein Spruit in Johannesburg is a public urban green belt that spans a distance of around 20km through as many as 30 Johannesburg, Randburg and Sandton suburbs. It’s used by mountain bikers, dog-walkers, joggers, horse riders and hikers.

It’s not fenced and has multiple entry and exit points. It’s a trail of convenience and a trail of contrasts. It can be challenging and it can be glorious. It’s used daily by thousands and if it weren’t for a group of keen mountain bikers known as ‘Spruit Fairies’ it wouldn’t be quite as attractive.

They fill dangerous holes, build and repair bridges, form berms to create sweet singletrack flow, trim low tree branches and improve drainage to minimise erosion. Who are they? We’re not actually going to name them, but we traced the ‘Chief Spruit Fairy’ to get some insight into this pack of do-gooders… By Sean Badenhorst

How long ago did you start working on the Spruit trails?

I’d say about four or five years ago.

Well I really just continued with the work that was started by a Joburg mountain bike club called the Swamp Dogs. They’re the original Spruit Fairies and there are still some of them that do work on this trail from time to time. I have just made it more of an ongoing project and call in the help of others when needed.

But you don’t do all the work yourself though, do you ?

No, actually, since January 2014 I have employed two guys, Wilson and Noel who I manage. They do most of the physical work, but I dig in too when necessary. Wilson is the main guy who works virtually full time on this project. We use Noel when the load is higher and we need more hands.

Why don’t you want your identity known?

This is public land. Any alterations to it generally require a lengthy red-tape process because of the potential dangers that could arise where people might get hurt as a result of the alteration. I keep our work to enhancement of the trail more in the interests of safety than putting user safety at risk. The whole idea is to maintain or improve the safety and the flow of the trail. In actual fact, our work saves City Parks from some schlep work.

Where possible we also try to improve trail user options. We work in some detours on the very popular sections to prevent walkers and mountain bikers from potentially dangerous interactions or collisions.

So when we see a repaired bridge or new berms on the twisty sections it’s you we have to thank?

Mostly. And my guys, who are very committed, hard workers. There are other small groups of guys that do some occasional work too. They deserve credit too. But, apart from Wilson and Noel, we all prefer to remain anonymous.

Where’s the reward in that?

The reward comes in seeing people enjoying the trails and riding them more often. Things that make me most happy are riding trails that flow with friends. Flow and friends – if our work is helping in those areas then that’s enough reward for me. I also really enjoy the challenge of creating flow out of what is already there. We avoid making major changes to the trail. All our work is really to enhance, not change.

You obviously ride? We see Wilson has an old Morewood bike too.

Yes, I’m a very keen mountain biker. I’m passionate about this trail, which is such a big part of mountain biking in Joburg. Where else in the world can you find, in the middle of a major city, 35 kilometres of flowing singletrack trail? I got Wilson that bike so that he can move around faster and independently and it’s also helping him to understand flow as he now rides the areas that we work on…

How do you get funding?

Some local businesses and individuals liked what we do and wanted to support us financially. So I opened a bank account specifically for the ‘Spruit Fairy’ work. Some donate biggish amounts and others have a monthly debit order going off their account into this account. I don’t need the money personally so every cent goes into the improvement of the trail.

Have you encountered any criminal elements on this trail?

There are a number of guys who live along this trail, sleeping under bridges or in thick bush. They’re mostly migrant labourers from Lesotho who are trying to save money. We’ve actually begun to have a good relationship with them. They sometimes help with trail work, often out of their own initiative by sweeping sections under bridges for the riders. They’re generally not criminally inclined but there’s a rogue element that arrives at times that can lead to muggings. Often it’s the local dwellers will chase that criminal element out as it threatens the stability of their temporary home environment We also we trim trees and remove weeds that could become vision obstructions to trail users.

What does the future hold for the ‘Spruit Fairies’?

I’m not sure. This project is low key and has good support. If it can stay this way we will be able to continue to make trails fun and safer, not only for mountain bikers, but all trail users.

If you’d like to contribute financially to the continued maintenance and improvement of the Braamfontein Spruit Trail, email sean@treadmtb.co.za for the bank account information.