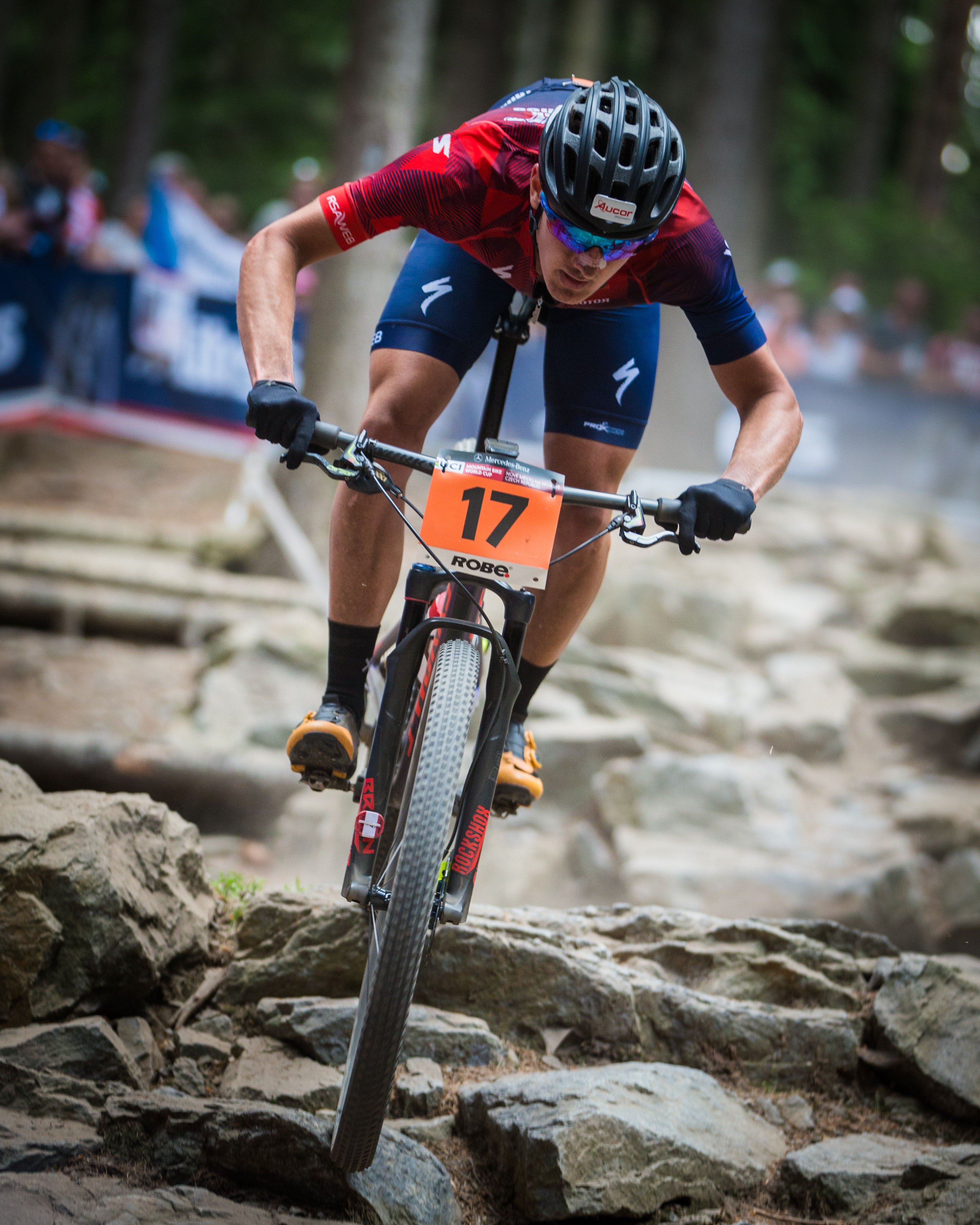 Team Spur’s Alan Hatherly was in the thick of the action throughout an enthralling five-lap fight on Saturday at the third round of the UCI U23 World Cup, hosted in Nové Město na Moravě, Czech Republic. When the dust settled, the South African and African XCO Champion and 2018 Commonwealth Games bronze medallist, had claimed third, and secured his second U23 World Cup podium.

The Czech course is one of Alan’s favourite and the high-speed terrain offered an opportunity to put a hard-fought but disappointing top-10 at a muddy World Cup in Albstadt, Germany, last week behind him. An unusual 16:00 race start time (U23 races are usually held in the morning of race day) threw the usual preparations and gave the U23 riders almost a full day to ponder on the upcoming effort. Needless to say it was unsettling!  What did suit Alan was the Nové Město course, featuring dry and rocky sections as well as natural rooty climbs and fast technical descents.

The start was flat-out as always, on a fairly wide track as riders launched themselves into the first climb. “I went super hard on the tar stretch out of the arena,” said Alan. “Getting up front on the start loop was vital to avoid congestion on the climbs and technical sections.”

In a repeat of last weekend, Alan found himself off the front in the start loop again, taking a small selection of riders with him onto Lap 1. The cat-and-mouse games between a motivated top five began straight away as riders responded to the pace making, mostly from Alan and Swiss rider Filippo Colombo, latching onto onto the group and then dropping off again.

By the final lap the group had been whittled down to four riders, with Alan very much in the thick of it all. With just the top three making the podium presentation in U23, there was plenty at stake. The question was, who would make the first move? “When Vlad [Dascalu, from Romania] attacked on the second last climb I thought he had gone too early,” reflected Alan. “I tried to push harder up the climb but made a slight mistake and had to unclip.”

As they crested the climb, Descalu disappeared into the thick forest. Alan’s slipped wheel had dropped him back to third, with the Colombo hanging desperately onto second. Although his lead was mere seconds the twisty course and dense tree cover made the perfect screen for the escapee and the chasing riders never closed on the flying Romanian. But it wasn’t over for Alan, as he ripped into the last couple of descents, laying aggressively into every turn and milking the course for every ounce of speed, hoping to steal second. But it was not to be: “Colombo came onto the final stretch just ahead of me, but by then even his 3-second gap was enough to hold me off,” Alan said. A satisfied Alan Hatherly finished in third place in just over 1 hour and 24 minutes.

Alan returns to South Africa for some downtime, with just one SA XCO Cup race on 16 June in Nelspruit, Mpumalanga. Then it’s back to Europe for another test against the world’s best at round four of the UCI World Cup in Val di Sole, Italy on 7 July.