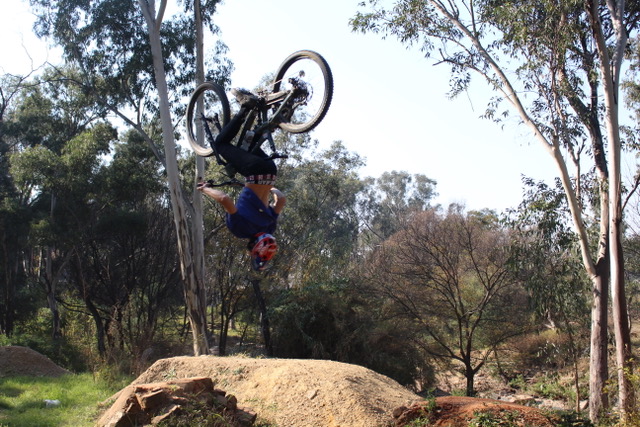 Dirt jumping is a sub-category of mountain biking that most love to watch, but few can ever hope to do. Dirt jumping is gradually growing in South Africa and, predictably, it’s the youngsters that are taking charge with tricks like Suicide no-hander, Toboggan and Nac-Nac. Sixteen-year-old Joburg rider, Rory Kirk, recently mastered the Backflip, an advanced trick. It wasn’t easy though. Here’s how he did it, in his own words, and, painfully, on video. Downside up! Rory in mid backflip. Photo by Brady Mayhook

You see them more and more – clusters of steep, sculpted dirt jumps that look like art. For want of an official term, they’re jump spots, where teens and kids gather to do sessions, pushing their limits, encouraging each other, sympathising with a fall, celebrating a successful trick, building character and creating friendships.

These jump spots are sometimes at bike parks, but mostly they’re on public land with good soil, generous shade, a gradual slope and some isolation from the general public – because you don’t want anyone that lacks common sense to try these jumps and get hurt.

What about Rory’s backflip? Well, the scene had to be set. Bear with me, just a bit more scene setting. Rory is a Grade 11 learner at St Stithians College. He does gravity racing (Enduro and Downhill), but obviously there’s been none of that due to the government enforced lockdown due to Covid-19. Since 1 May though, riding bikes for exercise has allowed youngsters to leave their home-made garden jumps and head for the real deal, all the while progressing with their own repertoire of tricks. For Rory, that was the backflip.

There are just 10 South Africans that have done a backflip that we know of. “It’s actually a very simple trick to do. The hard part is making yourself do it,” says multiple South African Downhill champion, Johan Potgieter, who also recently mastered the trick himself. “It feels super weird and scary to make yourself go upside down, but it’s a great feeling once you do it.”

Another South African, Greg Minnaar, the greatest downhill mountain biker racer of all time, also recently posted a video of himself doing a backflip in Pietermaritzburg. Although it most certainly wasn’t his first time.

“I first did a backflip about 18 years ago, when I was 20. So no, it’s not new to me, but it’s cool to see other South Africans giving it a go,” says Minnaar.

The thing about acing a trick is that it’s a process. As with anything worthwhile, there needs to be a goal and a plan on how to achieve that goal. And there needs to be perseverance and patience. While most adults are quick to criticise the youngsters for being the instant gratification generation, there are exceptions. And the Slopestyle boys (and girls) are surely the exception.

We chatted to Rory about his backflip and a few other things:

SHRED: How long have you been riding mountain bikes for?

RORY: I have always been able to ride bicycles since a very young age, and I’ve always been surrounded by dirt (motor)bikes and mountain bikes through my life, so I guess it was always going to lead to me riding mountain bikes. I have been riding properly for just over two years and I’m loving it.

SHRED: You compete in DH and Enduro, which is your favourite racing discipline and why?

Rory: Yeah, I compete in the South African National Downhill Cup Series, as well as the KZN GMC Enduro and Downhill Series, which has all come to a sudden stop, due to the current worldwide pandemic. Downhill would have to be my favourite as it feels amazing when all your mental and physical work on that weekend and race-day comes together and pays off with a good race run.

SHRED: What made you decide to try a backflip?

Rory: It has always been on my bucket list as something to conquer. A few of my friends and teammates had been able to learn a backflip with a foam pit or airbag, which is something we unfortunately don’t have in Johannesburg, and that’s what was holding me and my thoughts back on doing a backflip. Eventually, it was just overwhelming me and I needed to get it done no matter what.

SHRED: Did you watch some videos to understand the technique?

Rory: I had watched a few videos, on how to do a backflip, although the rotation on a bike is something I think every person will have to understand and manipulate differently in their own time and in their own way.

SHRED: Most people practice dangerous tricks with a foam pit or mats. You didn’t use either, correct?

Rory: Yeah, unfortunately we don’t have any of those facilities in Johannesburg, so we just had to soften a landing of a jump we estimated would work.

SHRED: You took a few attempts before you nailed the backflip, did you get badly hurt at all?

Rory: Yeah, so my backflip was a really tough experience, I only landed it clean on my eighth attempt, with one small knock-out and two or three black-outs; and I really hurt my knee, so I did have to take a week and a bit off my bike until I could ride again.

SHRED: Once you nailed it, how did you feel?

Rory: Once I had landed it, it felt unreal as if it didn’t happen at all! Felt like I was just riding away from a normal jump although I went completely upside down, it was an amazing feeling with all my mates shouting for me.

SHRED: Did you do it again at the same session?

Rory: Unfortunately, I wasn’t able to even stand up after my landed backflip, my body had been so battered and all my adrenaline had left my body. Although a week after, as soon as I was able to ride again I was able to do it.

SHRED: It seems you are able to do a backflip on demand now, correct?

Rory: Yeah, the backflip is really easy now that I have been able to understand how to control the pull off the face of the jump and how to speed up or slow down my rotation.

SHRED: What is the hardest part of achieving the backflip?

Rory: The hardest part, is definitely being in the right headspace, and the commitment. It really plays with your head, but I knew I had the skill to do it and land it, so I had to put full faith in myself.

SHRED: Have any of your friends/riding mates done a backflip?

Rory: A few of my friends in Cape Town are able to do it, and my mate that I learnt my backflip with, Rourke Avice du Buisson, is also able to do it on demand now.

SHRED: Tell us about your bike and gear?

Rory: I ride a Transition Patrol which is a do-it-all, big-travel enduro bike. When I did the backflip I was wearing some slim knee pads and a normal trail helmet, although my full-face helmet definitely would have saved my face from my current scars.

SHRED: Do you have any sponsors?

Rory: Yes, I have some of the best support in the business! Transition bikes (my bike); ANVL (components); Csixx (components); Fox Racing South Africa (protection, race kit and apparel); Liqui Moly (lubricants and financial support); Dragon Energy (financial support); DT Swiss (wheelsets); Cogent Industries (they set up my suspension); Nutrigen, (sports supplement and general nutrition) and Charger (socks). I am so fortunate to have all this amazing support as it allows me to do what I love doing almost as a job at such a young age.

SHRED: Which is your favourite place to jump and why?

Rory: Definitely Cape Town, there are some private downhill tracks there, as well as Hellsend Dirt Compound – they have some of the best tracks and dirt jumps in the country. Although we have a super cool local jump spot in the Sandton area near home, which is super fun.

SHRED: There are many youngsters getting into dirt jumping, what advice can you give them as they try to become more accomplished?

Rory: I think anyone can go far as long as they really love it and have a passion for it; and if you really enjoy it. Never give up, as long as you are having fun.

SHRED: Do you have any new tricks you’re keen to start working on?

Rory: Definitely – I have some ideas! Although I want to focus on my training and racing first. I don’t want to hurt myself too badly as I think I have a future and a strong career in the gravity racing scene.