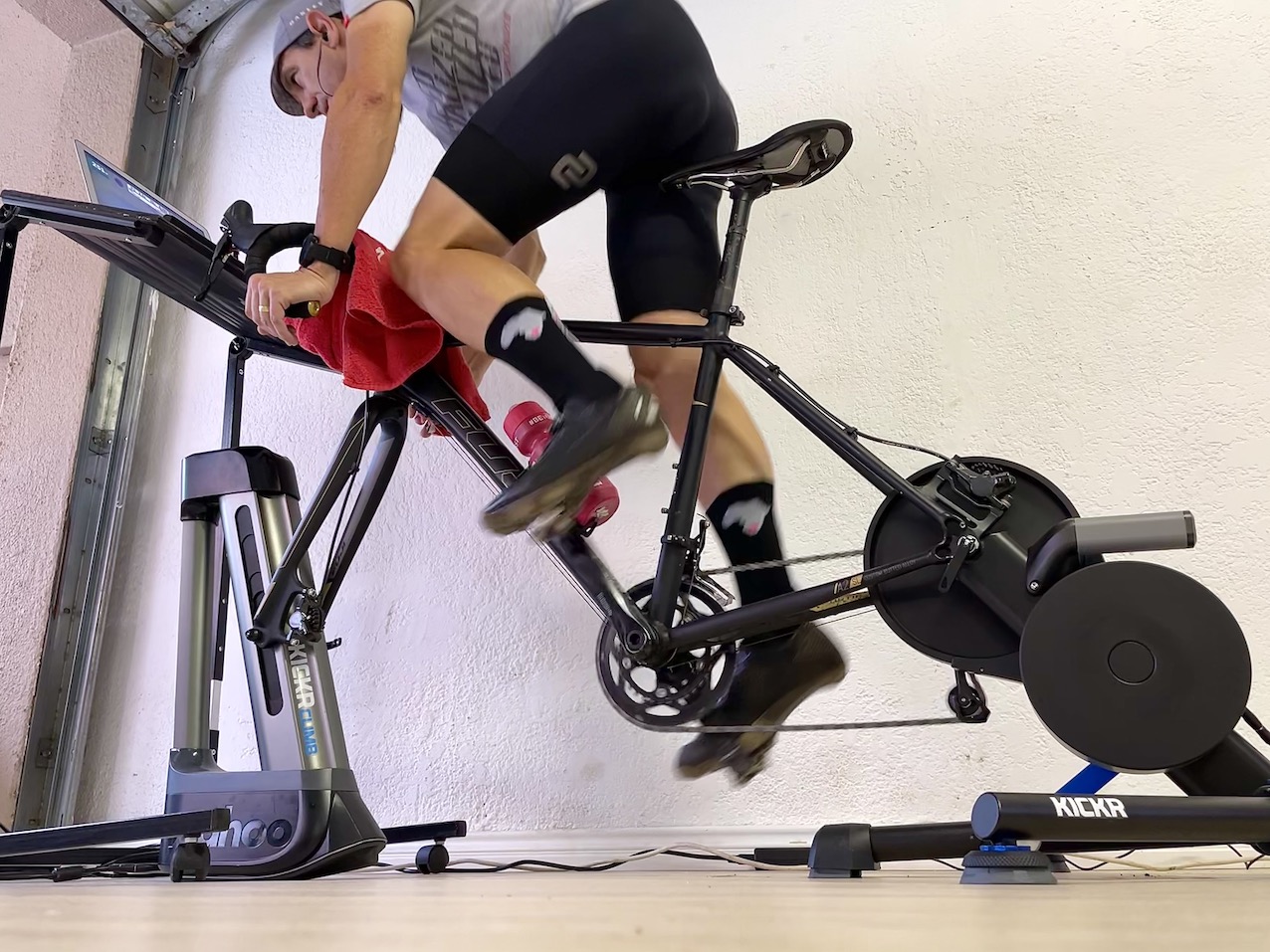 Wahoo recently updated its flagship smart trainer, the Kickr, known as the Kickr 5. Our team spent a few weeks putting it through its paces and also added the Kickr Climb to the set-up. Here’s what we experienced.

Wahoo is the most popular home trainer brand among mountain bikers in South Africa, confirmed by our TREAD surveys in 2019 and 2020. It offers four models of smart trainer, the Snap, the Core, the Kickr and the Kickr Bike. It also offers the Kickr Climb, a gradient simulator. It was fairly straight forward doing the set-up. You just need to download the Wahoo companion app on your phone to conclude the connectivity side of the set-up. The physical side was also quite simple. The Kickr 5 comes standard with an 11-speed cassette, which is Shimano and SRAM compatible and ideal for most road bikes. We used a road bike for our test, but if you use a mountain bike there are appropriate 142x12mm and 148x12mm thru axles to fit it. You can also get a 12-speed adapter if you need to fit a 12-speed cassette.

It doesn’t come with a front wheel ‘block’, but you don’t really need one because you can adjust the height of the Kickr to ensure your bike is horizontal.

What we like is the gray handle and the folding legs. This allows you to move the Kickr relatively easily if necessary.

The Kickr 5 comes with a power accuracy of +/- 1%, which basically means that it’s very accurate in terms of the power reading it shows from your effort. It can detect a climb up to 20% gradient, which is pretty much all you need as there aren’t many gradients steep that on any training/racing apps. And it offers a maximum of 2200 Watts power resistance in case you’re a beast of a rider that can push that much wattage.

We did our entire review using Zwift with three different testers. There were never any issues with Wi-Fi connectivity, but there is a port on the Kickr 5 should you want to be certain and use a cable (sold separately).

The feel of the Kickr 5 is smooth and not particularly noisy. Apparently, the compressing feet on the Kickr 5 – an update on the Kickr 4 – deliver vibration damping and reduce any noise it may make. There’s a recommendation in the Kickr manual for using different feet for different rider weights. We’re all average weight so stuck with the medium sized feet that were already fitted to it in the box.

The new compressing feet can also offer up to 5 degrees of lateral movement (2.5 degrees each side). We didn’t really feel like it gave a real-sway feel, but it’s unlikely that was Wahoo’s objective. A little bit of lateral movement is mostly needed when out of the saddle on a climb or in a sprint.

Intervals aren’t fun, so we don’t do them. If you are a serious rider/racer though, there’s an ERG mode you can use where you can set your desired power level. We just kept it in the Simulation mode throughout our test period and paired every session with Zwift.

You’re able to freewheel on descents as you’d expect. However, on long descents, if you don’t pedal at all, the ‘rear-wheel’ momentum gradually slows and stops so you have to start pedalling from a high resistance point. We found that just keeping the pedals moving a bit or ‘soft-pedalling’ eliminated this somewhat and we were able to resume pedalling with intent more smoothly when the gradient softened or changed. As far as smart trainers go, the Wahoo Kickr 5 offers everything you expect. It’s consistent, reliable and accurate. It delivers a smooth riding experience that suits you no matter what your level of performance expectation is.

After a couple of weeks on the Kickr 5 we added the Kickr Climb, which you attach to your fork and which simulates climbing gradient, moving the front of your bike up – and down – in alignment with the gradient you are riding. We didn’t unbox it as it was a demo unit, but it does come with a range of axle mount options to be able to fit any road bike or mountain bike. You can set it manually to the zero-gradient point so that you’re essentially gradient-calibrated from the start. You can also lock it in place on a set gradient, which is useful if you’re doing intervals in ERG mode and want a specific gradient. It can simulate climbs up to 20% and descents down to 10%. We never used it in ERG mode, so always unlocked it to be able to match the gradient we were riding in Zwift. We only needed to pair it once, when we first used it, to the Kickr 5.

It’s really very cool to feel the front moving up and down and it always seemed to be in sync with the gradient we were riding at that very moment. In other words, it seemed very accurate. If you listen carefully, you can hear a little whirring motor sound as it changes pitch, but it’s very soft and no bother at all.

Besides other routes, we decided to test it on a climb up Alpe du Zwift, which takes around an hour to climb and which changes gradient pitch throughout with an average gradient of 8.5%.

Having spent months riding on smart trainers with no gradient simulation, it was quite a refreshing change. It was also a bit of a wake-up call! When your bike is level all the time on a smart trainer you use certain muscles in a certain way and obviously build the condition of those specific muscles. When the bike is angled upwards at varying degrees for over an hour and you are trying to average over 200 Watts (74kg rider) for the whole climb, you start feeling the fatigue in the final quarter. But you feel it even more the next day!

The gradient simulation definitely forces a slight change in muscle engagement, hence stiffer muscles than expected the following day. Our Alpe du Zwift time was slower than we were aiming for, but that’s most likely because we were actually physically climbing and not just pedalling in response to different resistances based on the gradient changes. We didn’t compete in any virtual races on the Climb, but expect that you may be at a disadvantage if your rivals don’t have an extra layer of virtual reality to manage.

You can go through your cycling life quite fine without a Kickr Climb. But it most certainly ensures increased engagement with your virtual routes. If you’re pedantic about performance, spend more time indoors than outdoors, or can afford it, it’s a really great way to enhance your smart trainer experience.