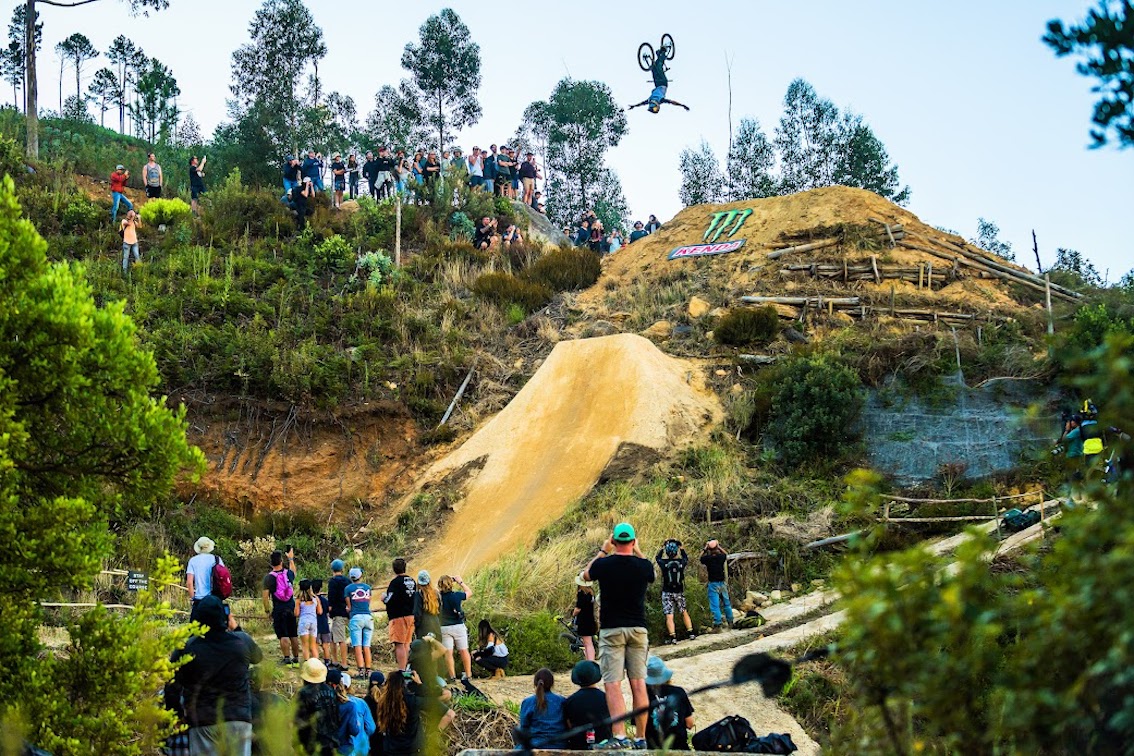 After years of watching the videos and absorbing the photos, the TREAD crew finally got to experience Darkfest. While the annual big-jump gathering of many of the world’s best slopestyle and freestyle mountain bikers is a made-for-media event, it’s actually more impressive in person. Here are seven reasons Darkfest 2022 blew our South African minds!

Stage races and marathons dominated mountain biking from the 1990s through to the mid-2010s but as the next generation of riders began to reach their teens, things started to change a couple of years ago, as explained in this article.

It’s not a bad thing. We have the Absa Cape Epic and an array of world-class stage races and  marathon events that make the country the global leader in this segment. But the majority of South African mountain bikers have no understanding or appreciation for free-ride and slopestyle mountain biking, which is what Darkfest celebrates.

The TREAD crew certainly are no strangers to gravity racing and local dirt-jumping, but Darkfest is simply on a scale so grand that we’re still trying to absorb our two days of what can only be described as awe, including…

THE SIZE OF THE JUMPS

You think you’ve seen big jumps, but you haven’t really. The jumps at Darkfest are just ridiculous. Most of them incorporate some form of a gap because none of the riders ever roll a jump – not intentionally anyway. There’s a take-off and a landing and anything in between would be wasted. The one jump that’s actually featured as a gap jump is the 90-footer, which metrically converts to 27.5 metres. Having examined it in person, it seems longer than that, but the point is, it’s just massive! The Hip, Step-Up, Rocket 1 and Rocket 2 are the other named jumps, all being flipping huge!

HOW MANICURED THE COURSE IS

The focus of Darkfest is to give the riders the best possible platform to show their skill/craft/talent. This means a course that’s perfectly built, carved and groomed. The goal is for the riders to not have to worry about line choice but to be able to hit each jump with full confidence. Big props to local trailbuilders, Justin Novella and Duran van Heerden and their crew for not only presenting, but also maintaining a course that’s truly consistent and sublime.

THE COURAGE OF THE RIDERS

No matter how seasoned or skilled they are, the riders at Darkfest also experience some level of fear. But instead of letting that fear consume them, they stare fear down, take control and rise to a new level of themselves. We were there on Days 2 and 3 when the riders were still getting accustomed to the course. Some of the men were brand new to the event, so it took them a good few runs, often behind a more confident rider, to get an idea of the right speed with which to hit the jumps, or to become more assured on more formidable jumps.

It’s not specific to Darkfest riders, but a gravity riding community thing. While Darkfest isn’t a competitive event, there’s always a sense of competition between the riders because, well, they’re humans who are ambitious and talented and motivated to improve and be better than their rivals and contemporaries. But all of this is secondary at Darkfest where riders show immense camaraderie and support for one another. The cheers and accolades flow freely when acknowledging a fellow rider’s impressive trick or achievement. And they’ll never turn down a request to tow a rider into a jump to help them hit it properly. In fact, there are likely more offers than requests…

It came as no real surprise that the Darkfest riders are free-spirited. You have to be to do tackle such a high-risk activity as a career. You get the feeling that, driven by their curious and adventurous souls, they’ll try anything once. It’s something to envy because most of us wish we possessed that combination of carefreeness and talent. To see, in person, humans really throwing caution aside – albeit on the back of years of experience – is quite something. There’s a small part of you that joins them when you’re actually there – you hold your breath a little when they take off and you let out a gasp of relief when they land safely. You know the risk and they know the risk and somehow that makes you feel connected to them, sort of, but not completely vicariously.

THE KINDNESS OF THE LAND OWNER

It’s actually pretty damn incredible that Darkfest happens in South Africa. It truly is one of the great  mountain bike spectacles on the planet. It takes place at Hellsend Dirt Compound, a gravity and dirt-jump-orientated mountain bike park just a few minutes’ drive from Stellenbosch. It’s located on a wine farm called Vuurberg, which is owned by Sebastian Klaassen. We were pleased to meet Sebastian, who was ever attentive throughout the week of Darkfest. His son is Ike Klaassen, one of just three South Africans in the Darkfest 2022 line-up (the others were Theo Erlangsen and Andrew Neethling). We stood with Sebastian for a while between the two Rocket Launchers (the final two massive jumps) and noticed that he’s absolutely passionate about the event. It really is an event that’s hard for many to relate to because, well, it’s contested by a fraction of a percentage of humans that have a blend of guts, talent, free spirit, ambition, interesting personalities and a love of bicycles. Sebastian understands the value of these humans and his support for them and the event is to be appreciated.

THE SKILL OF THE DRONE PILOTS

Every so often you’ll see a rider – or  few riders – heading off for a specific jump or full-course run and they’ll be tracked from behind and above, and sometimes in front, by a drone. The skill of those drone pilots, who are clearly aware of exactly which angles are required for the best visuals, is simply phenomenal! They have to keep their distance from the riders, but are so adept at what they do that they get incredibly close without interfering in the rider’s jump, trick or landing. The angles they get and the footage they record is the closest you can get to bringing Darkfest to real life – through a screen. But it’s still way better to experience it in real life! If you can, try to get there next year (the public can get tickets to watch on the final two days) and prepare to get your South African mind blown!