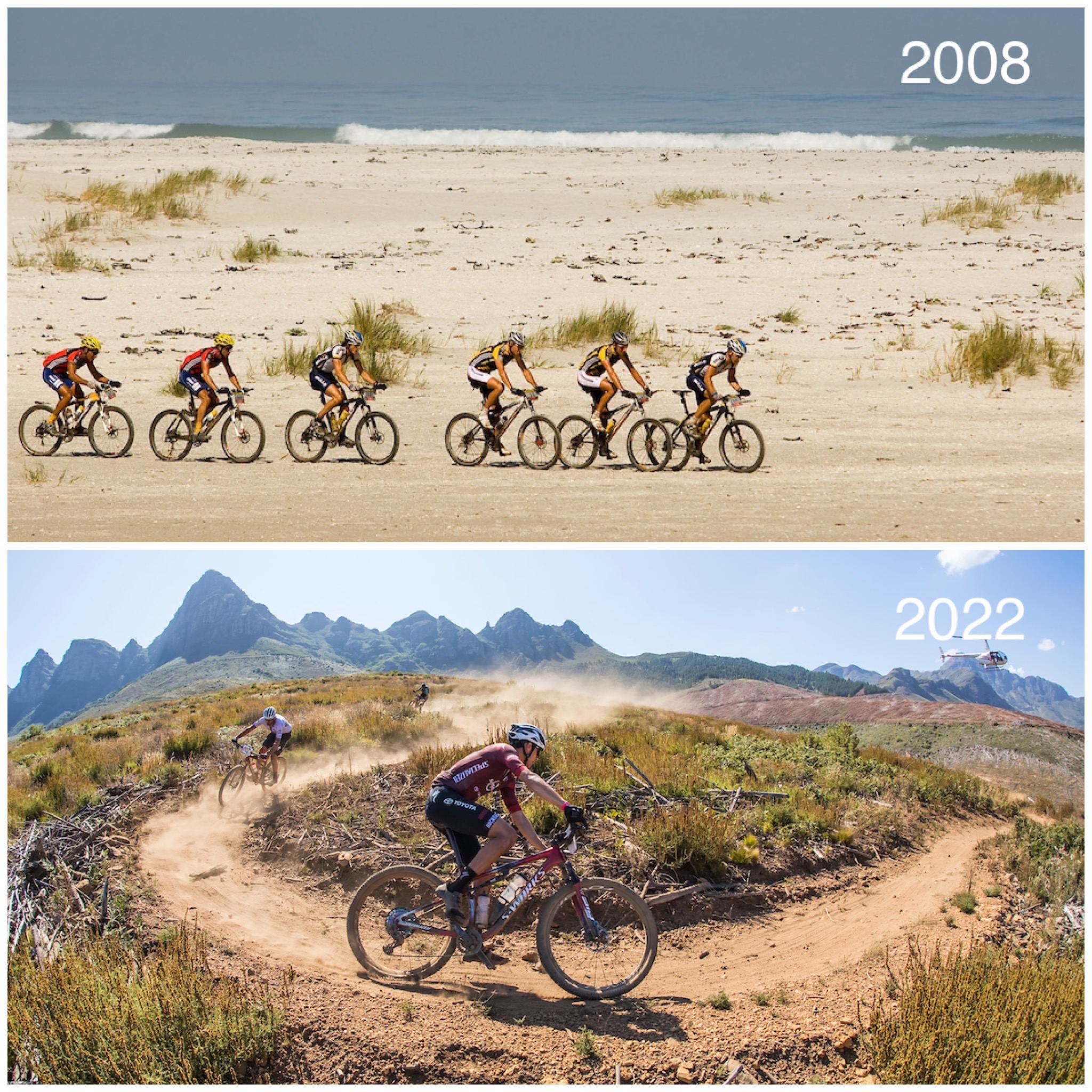 It’s a question asked after many an edition of the Absa Cape Epic – was that the toughest Epic yet? With the most distance and most elevation, the notorious 2008 edition also held the record for the most teams that didn’t finish. But that dubious honour has now moved to the 2022 edition, which, based on our historical stats, was possibly toughest Cape Epic yet. Here’s the data…

There is never an easy Cape Epic. There’s actually never really an easy mountain bike race. It’s a tough sport. It’s one of the reasons so many of us love it. But the annual Absa Cape Epic is the highest profile mountain bike stage race in the world and it’s become somewhat of a benchmark by which other stage races are measured.

After Stage 2 (Day 3) of the 2022 Absa Cape Epic, we published this article that revealed just how brutal the first two stages had been, through a combination of heat (Stage 1) and headwind/distance (Stage 2). But while those two stages didn’t claim as many as Stage 1 of the 2017 edition (when 80 teams succumbed), they did cull the field significantly, with subsequent stages seeing more riders either not making the daily cut-off or opting to withdraw.

Note, you may have to turn your mobile phone to landscape to see full tables

Seven teams on the opening day? Six solo riders finished without their partners, so likely illness or a positive PCR test for the virus.

It’s always worth remembering though that when a team is eliminated from the race for whatever reason, it’s seldom both riders that leave the race. It’s usually one team member that struggles and withdraws leaving the remaining teammate to complete the event on his/her own. There were a total of 117 riders that completed the 2022 edition as Individual Finishers. They get a medal, but they don’t feature in the team results, obviously. They are listed on the official results though as a finisher, with their stage and total times all recorded.

In the 2000s, the Cape Epic was still in its infancy and the annual route was difficult to alter really, since it needed to take riders from Knynsa to Stellenboch and there were only so many options back then. The Cape Epic route director in those days was Leon Evans, who was given the nickname Dr Evil because the route seemed to get harder each year. In 2008, Leon took it a step too far, which is why that edition is spoken of as the most brutal.

The obvious differences between the  2008 and 2022 editions are the race format and the route. The 2008 edition was the last point-to-point version from Knysna to Stellenbosch. Back then, mountain biking wasn’t that popular and there were limited established singletrack trails, so the route covered a lot of ground on gravel roads and jeep track. Nowadays, the route uses a clover-leaf format with more than 60% singletrack.

Roel Paulissen and Jakob Fuglsang won the 2008 edition in a time of 36 hours 01 minute 44 seconds. Georg Egger and Lukas Baum won the 2022 edition in 27:44:06. And of course, in 2008 it’s likely all the riders would have been on 26-inch wheels versus the standard 29-inch wheels of today. The 2008 edition was the first to have a Prologue and the only edition to have a total of nine stages.

Some comparisons between what appear to be the toughest editions:

Oliver Munnik, who has now completed 12 editions of the Cape Epic, is always a good rider to speak to because he’s doesn’t sugarcoat his opinion and he’s been riding at the sharp end of the Cape Epic since he was at school. Not quite, but it seems that way. The 2008 edition was his second and he and Erik Kleynhans finished 12th overall.

“The Absa Cape Epic is always tough. To say one is tougher than another is not that accurate. We just have this ability to forget what we have been through,” said Munnik after the 2022 edition, where he and Nic Dlamini, racing as Team Absa Amawele, finished 29th overall.

“You get guys who train with a 34-tooth chainring and then come to race the Epic with that. I train on a 34 but race the Epic with a 32. This year there were some steeper climbs where that was actually really important. But also, by Stage 5 you accumulate fatigue and having a slightly lighter gearing option helps for the second half of the race,” added Munnik, who admitted that the exceptional off-the-bike support from Absa in 2022 also helped.

“Having done seven Epics, I do think the 2022 race was one of the more challenging routes. It was an awesome route, but if you were underprepared, there was nowhere to hide,” said Craig Uria, who, as Team Restonic with Andrew Duvenage, was third in the Masters and 25th overall. “It seems like there was a concerted effort to find the steepest climbs possible! And the long stages had lots of singletrack, whereas in the older Epics those long stages were mostly on roads.”

“This was definitely one of the hardest Epics I’ve done,” said Duvenage. “The heat on Days 1 and 2 put a lot of people on the back foot from the word go. Having the Queen stage on Stage 1 was disruptive and the gradients seemed steeper than the last few years. Not just steeper sections, like in the past, but entire climbs were steeper. Also, long stages returned.”

“It was a hard Epic for sure, but it must have been harder for the women’s teams. I rode in a Mixed team this year, which gave me the advantage of a strong male partner who protected me throughout and even pushed my bike for me up that climb on Stage 1. But for the women-only teams to ride without bunches for protection into the wind would have really taken its toll,” said Marleen Lourens, who has completed seven Cape Epics.

“They need to keep the Epic tough though. Riders must prepare better. I noticed riders carried too little water on them. There’s no excuse not to have enough water with the modern hydration packs, like USWE available these days. Even the pros use them on some stages,” added Lourens, who finished third in the Mixed division with Fairtree Singletrack teammate, Zachary Swart and 116th overall.

“The Cape Epic is meant to be tough, nearly impossible for the average man. This is the reason it is so special,” said Lance Stephenson, a mountain bike coach whose first Cape Epic was the 2022 edition. The first two stages were so tough for us, but the next six smiled on us. This route took us to amazing places. The Cape Epic wouldn’t be so special in the hearts of the riders if we didn’t suffer, overcome and experience a range of emotions.” Stephenson and his Spilo Express teammate, Cameron Wright, finished 177th overall.

All categories start and finish stats 2022

% of Teams that DNF

Except for Women in 2018, the percentage of teams that Did Not Finish the 2022 edition was higher than the previous four editions overall and in every category. The Grand Masters (50-years and older) and Mixed saw significant DNF rates this year!

Africans (and South Africans) in the Cape Epic overall top 10:

Unfortunately Craig Beech was a non-finisher at the 2022 editions, so now only three riders have completed every edition of the Cape Epic (18 in total). They are Hannele Steyn (56), Mike Nixon (63) and John Gale (53)– all South Africans.