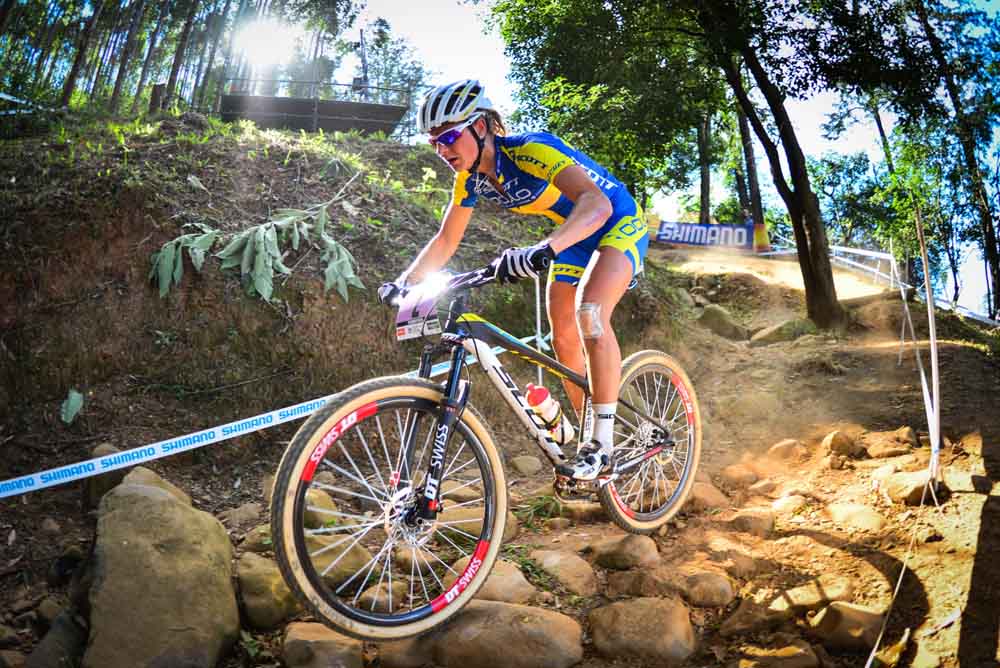 Pietermaritzburg – The under-23 men’s and women’s cross country races of the UCI MTB World Cup, presented by Shimano, season opener in Pietermaritzburg saw Jordan Sarrou and Jenny Rissveds overcame not only their fellow competitors but the hot and dusty conditions of Cascades MTB Park as well en route to their respective victories.

The under-23 women’s race was a no contest with SCOTT-Odlo MTB Racing team rider Jenny Rissveds producing a near flawless performance as she claimed victory by 36 seconds and her first ever World Cup cross country triumph.

“It feels amazing to have won!” said the 19 year old Swede. “It is my first World Cup cross country win and so I’m really happy!”

Conditions were brutal throughout the clash and, despite being the first race of the day out the blocks, temperatures were already uncomfortable midway through the clash.

“It was a tough race because it was really hot and I’m very relieved we started at 9 o’clock in the morning!” said Rissveds.

“The first lap was really tough and then I tried to keep focused and cool down a bit for two laps before accelerating a bit again on the last lap.

“I made a big mistake in the rock garden on the last lap. I didn’t crash but I had to get off my bike and run down the whole rock garden but other than that I had a great race and didn’t make a mistake.”

The rejigged Cascades MTB Park cross country course has been well-received by the vast majority of riders and Rissveds echoed this sentiment having spent many hours out on course in training beforehand.

“I tried a lot of different lines in training, especially in the new rock garden, which I think helped me today. I like the new course, its tough, technical and fast.

“It was hard to keep pushing. During the middle laps I heard that the girls were catching me a little and that was tough to hear but I just looked to stay focused and keep positive and just keep pushing to the finish,” an elated Rissveds mentioned.

The race took a dramatic turn towards the back end of the encounter after third ranked rider Jovana Crnogorac (Salcano Alanya) crashed twice during her opening lap and ending her charge for the win.

Shortly after the conclusion of their female counterparts it was the turn of the under-23 men and as the mercury continued to rise there was no respite for the young men.

Cannondale Factory Racing’s Anton Cooper was the quickest out the blocks to claim the hole shot but it was soon the BH-Suntour-KMC’s duo of Sarrou and Victor Koretzky who surged to the front and went about setting a blistering pace.

Disaster struck Koretzky early in the second lap though as he broke his chain, ending his title hopes and leaving it up to Sarrou to fly the team’s flag. And fly it he did.

“I’m very happy to have won the first World Cup of the year and to take the leader’s jersey!” said Sarrou afterwards. “I went into the lead right in the beginning and I didn’t let it go for the rest of the race!

“The course is even better than it was for the World Champs last year. It was very technical and with it being as warm as it was, I’m very happy I felt so good and could get the win.”

“It’s nice to be up where I was two years ago,” said Reid. “I’ve always believed I’ve had that kind of shape but it’s taken a full two years to get back up to where I was when I last got a fourth in Maritzburg.

“I’m going well at the moment but I took a bit of a knock when I went to the States recently and had my eyes opened to just how fast I actually needed to be so I came and really put my head down and worked hard in the build up to the World Cup.”

Slow off the mark meant Reid’s top three hopes were dashed early on but the local lad was still happy with the final outcome.

“Today was good. I had a poor start and was slightly off the lead group in the first few minutes which meant it was kind of decided up front already. So I got locked into a bit of a ding-dong battle with (Anton) Cooper.

“It was a tough position to be in because had I tried to go after third I may have gifted fifth a free ride with me.

“Anton and I ended up going a similar speed for much of the middle part of the race before tactics came into play in the last lap. Cooper had been getting quicker little by little so on the last lap I decided just to go for it and fortunately he couldn’t stay with me.

“I’m stoked to get the World Cup season off to a good start. Stoked to be in the top five, podium would have been nice but I’ll take it!”

Reid also showed his appreciation of the support he received from the home crowd at Cascades.

“I grew up about 20 minutes away from here so there were a lot of old friends here and the Maritzburg crowd really helped me enormously.

“It’s also really good for the South African public to see that we do have the cross country potential here in SA,” Reid concluded.