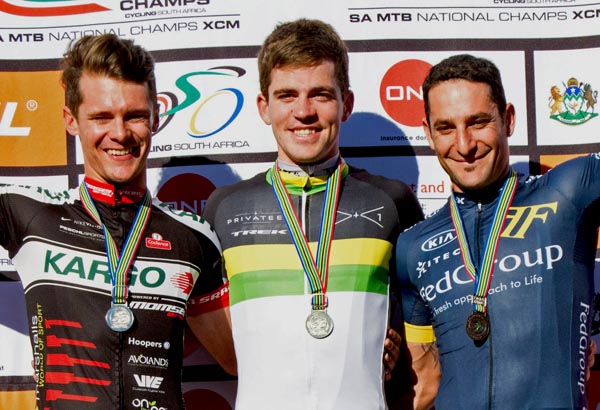 Pietermaritzburg – Freshly re-crowned national marathon champion, James Reid is faced with a tough conundrum of decisions ahead of the 2014 UCI Mountain Bike Marathon World Championships which take place in Pietermaritzburg on Sunday 29 June.

Despite the under-23 cross-country star making no secret of his preference for the Olympic discipline of the sport, Reid surged to victory in the SA National MTB Marathon Championships this past weekend to retain the national title he clinched famously in 2013.

The pleasing result has however opened up a subsequent can of worms for the Trek South Africa rider who is now re-evaluating taking on the Worlds’ challenge in less than three weeks’ time.

“I’ve been really focusing on cross-country this year and I didn’t expect to be anywhere at SA Marathon Champs really so Worlds certainly wasn’t a consideration at all before this weekend,” explained Reid.

“It’ definitely is now after winning Nationals though but it’s a really difficult one!”

The decision to compete at the Marathon World Champs is complicated by Reid’s XCO preference.

After suffering a disappointing and frustrating 2013 season which saw him slide down the national pecking order, Reid has returned to top form in the first half of this year after stringing some impressive results together on both the national and international cross-country scene.

So impressive has Reid’s turnaround been, that many of the MTB fraternity believe he is now once again a strong contender for a spot in Team South Africa who will represent the country at the upcoming Commonwealth Games in Glasgow, Scotland in July.

Should this transpire, then Reid is unlikely to risk over-extending himself by competing in the Marathon World Champs in PMB at the end of the month. However the appeal of competing on marathon’s greatest global stage, generated largely by South Africa’s unique marathon thirst, has left the young star’s mind frantically working overtime as he looks to make sense of the maze of scenarios he is faced with.

“It was great to win this past weekend, a national title always matters! A lot of titles and races matter but a national one really stands out and in a country that is so marathon-crazy definitely added a special touch!” said Reid.

“Cross country is still my focus though and so I’ve got a lot to work through in few days.”

“As much as it would be great to race both World Marathon Champs and – if I am selected – then Commonwealth Games too, it just isn’t realistic to think that you can be on top of your game and peak for both events.”

The situation is further complicated by Reid’s uncertainty of whether he has in fact even qualified to participate in the global showcase.

“I wasn’t able to ride in the World Marathon Series events in Sabie or Clarens as I was racing overseas and so I couldn’t qualify that way and I’m not sure if this [victory at SA National MTB Marathon Champs] even qualifies me!” said a bemused Reid.

“There is lots to consider and there are two selections – the first being Commonwealth Games and the second Marathon World Champs – so I’ll obviously be in contact with Cycling South Africa quite a bit over the next few days to try and establish what their thinking is, where I stand regarding both events and then try work out what the best option for me is.”

Reid, who crossed the line ahead of Kargo Pro MTB’s Rourke Croeser and FedGroup ITEC’s Kevin Evans, was surprised to have clinched the victory, especially after a mechanical in the early part of the race saw him someway off the pace however believed the cross-country nature of the route played a role as well.

“It’s funny how often these things come about when you’re not overly expectant. I just took every step one at a time and it was a real blessing to win!” said Reid.

“When I broke my chain after 13km I thought that was my race over. Fortunately I managed to catch back up by about 25km or so but even so I thought the extra work I’d had to do to catch up would catch up with me a little later in the race.”

“I think the course really suited me though. It was really punchy, fast rolling, rough and raw, had a lot of climbing and heaps of singletrack – very much like cross-country. We even came down one part of the World Cup cross-country course itself!

“Rourke (Croeser) and I worked really well together when we got away but when he started dipping just a little I knew I had to go for it on my own.

“I basically did exactly what I did last year though – I waited for the final bit of single track and then looked to use my cross-country skills as best I could.”

Regardless of the final pathway he eventually follows in the coming six weeks, many a South African MTB supporter will be hoping all falls into place and works out favourably for both Reid himself and the nation as a whole.