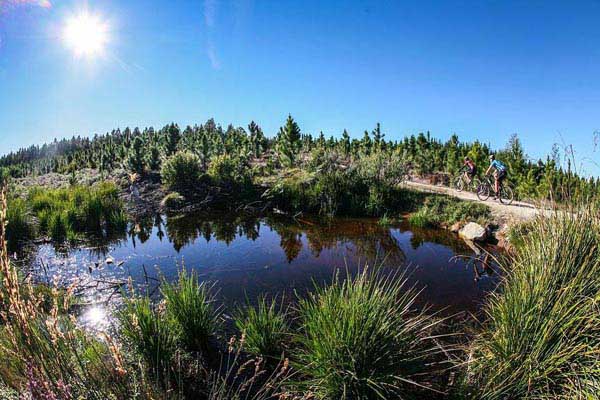 The quest by the 36ONE Storms River Traverse to retain its status as South Africa’s most family-friendly mountain bike stage race, has resulted in a record influx of early entries for the 8-10 August event.

The only mountain bike stage race that includes the coastline of the Tsitsikama National Park in its route has just a limited number of the 200 places remaining and organisers, Dryland Event Management, are certain these will be filled soon.

“Our focus at this event is on enjoyment rather than suffering. There are many events, including some of our other races, where suffering levels are high, so the 36ONE Storms River Traverse offers a refreshing change. The route is still challenging of course, but the stages aren’t excessively long and the riders’ supporters and family have a full programme to keep everyone satisfied,” added Herholdt.

With each stage starting and finishing at the Tsitsikama Village Inn Hotel, the logistics for riders and their supporters are reduced to a minimum, especially since most of the participants stay at the Village Inn Hotel, which has colonial style cottage rooms, set in well-manicured gardens.

“We have as many spouses and children at the event as we do riders. It’s the most unique atmosphere and it all takes place in a stunning part of the country. There’s also so much to do off the bike in that area, which is a popular tourist destination, but which isn’t too crowded during that time of the year,” said Herholdt.

Among the entrants for the 2014 edition of the 36ONE Storms River Traverse are motor racing stars, Giniel de Villiers and Gugu Zulu. Both are keen mountain bikers when they’re not racing rally cars. De Villiers will team up with Specialized Africa head, Bobby Behan, while Zulu will partner with Andre Ross, head of the Diepsloot MTB Academy in Johannesburg.

“I don’t know of another event quite like this one, which is one of the key reasons 36ONE wanted to become involved,” said Steven Liptz, co-founder of 36ONE Asset Management.

“From sunrise until bedtime the 36ONE Storms River Traverse is an amazing mix of bike riding in natural beauty, great food, warm Eastern Cape hospitality and connecting with family and friends. At the end of the event you’re filled with new experiences and memories to treasure.”

For more information or to secure one of the remaining entries, visit www.the36one.co.za