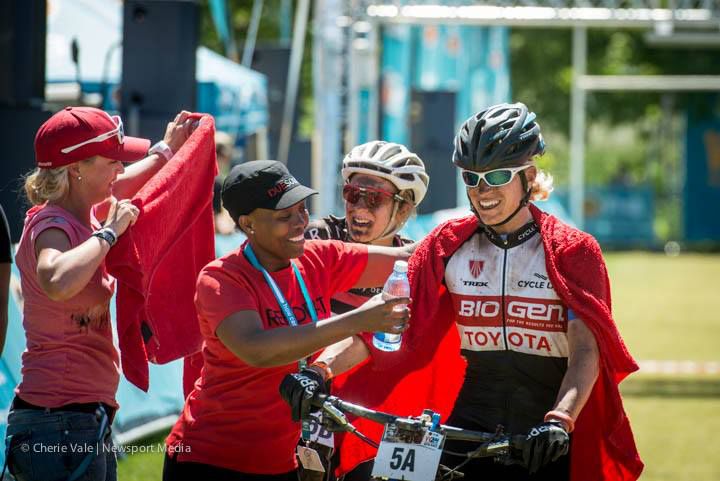 Traditionally the final major stage race for the year, the 2014 Wines2Whales Race, attracted a strong women’s field, setting the scene for three days of close racing.

Friday’s Stage 1, a 74km leg from Lourensford Wine Estate in Somerset West to Oak Valley, Grabouw, took place in searing heat, with a top temperature of 45 degrees Celcius recorded on the route.

“Unfortunately Catherine was feeling a bit ill today and wasn’t able to race at 100%. But she still gave what ever she had and we were able to at least stay within sight of the race lead,” said De Groot on Friday evening.

Saturday’s Stage 2 was held over a circular 64km route that started and finished at Oak Valley. With slightly cooler temperatures and a shorter stage, the racing was on from the start.

De Groot and Williamson managed to win the stage and secured a big enough lead over second placed stage finishers, Neethling and Stenerhag, to move into a 48-second lead with one stage remaining.

“Catherine was a lot better today and we were eager to take the stage win. The racing was close though which is great for women’s racing where there isn’t always this much depth. Fortunately we got enough time to get the overall lead and will be defending that with everything we have on the final stage,” said De Groot after Saturday’s leg.

The final stage, a 73.5km haul from Oak Valley to Onrus, near Hermanus at the coast, saw a thrilling battle in the women’s race. With most of the stage’s 1300 metres of vertical ascent coming in the second half, the event holds a surprising sting in its tail.

De Groot and Williamson managed to win the stage ahead of Neethling and Stenerhag, but the winning margin was only 68 seconds as the latter pair exhausted themselves pursuing their rivals over the final 12km.

“It was a great contest today! Apparently Candice and Jennie saw us on the last long climb, which motivated them. We actually weren’t aware that they were that close and we decided to take no risks on the last section of singletrack. That’s where they closed the gap on us and for the last couple of kilometres it was an all out effort to get the stage win,” said De Groot.

“It was good to race with Catherine. She is very experienced and we certainly seem to connect well on the bike and off it, which is important in mountain bike stage racing,” said De Groot.

“I must thank TREK, my bike sponsor. I found a crack in my frame last week and they went out of their way to build up a brand new bike so that I had a racing machine for Wines2Whales. I flew to Cape Town without a bike, collected it two days before the race and it all ran smoothly,” smiled De Groot.

“It’s great to finish off the year with a win. Without my sponsors, Biogen, Toyota and Cycle Lab, I wouldn’t have been able to pursue racing mountain bikes professionally as I have this year. I’ve learned so much; especially in the races I didn’t win and will take that experience into 2015 with new goals. But first a proper break!”