Following the TransCape trial ride last week for the 2017 edition of the iconic 7-day mountain-biking journey, our route director Wayne Collett and his team have decreased the total amount of climbing on the 7-stage event by 1300 metres as well as the cumulative distance from 675km to 650km.

The two stages on which the changes have been implemented are the first two. Instead of covering 102km and 2600 metres of ascent, the first stage has been tweaked to offer an 80km ride with an elevation of 1700 metres from Knysna to Wilderness.

Stage 2 is the queen stage of TransCape and remains a monster challenge at 135km, but it has been reduced from 2400m ascent to 2000m. With the changes the stage becomes infinitely more ridable with a delightfully quick and scenic middle half. It’s also now sandwiched in between two 80km stages, which balances the first half of the event nicely.

The route crew, consisting of Andrew White, Wayne Collett, Peter Dowling and race director Darren Herbst worked on the changes during their week-long riding excursion to bring the route in line with where the organisation would like to position the event.

“The changes will temper the overall challenge to bring it in line with the event owners’ vision for TransCape,” said Collett.

“We want to offer riders an iconic challenge, but it’s not our aim to benchmark it on the difficulty of the Absa Cape Epic.

“With these changes we feel it nestles nicely in between the Epic and some of the more manageable 3 Day stage races in the country from a difficulty perspective – certainly nothing as difficult as the Epic,” he said. 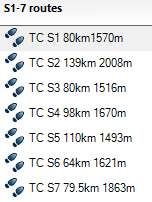 For all the updated route info, click here to go to the event site.